Speed is available on Amazon HERE.

{I purchased this game myself. All opinions are my own!}

My affinity for EDUCATIONAL GAMES began with this game, Speed! I bought it on the recommendation of a friend after discovering how unfun learning multiplication was going to be for my son. He was a young, wiggly boy who needed more than flashcards and worksheets. So, Speed it was!

But that was years ago! As a matter of fact, I was shocked when I sat down to write this post, that I bought Speed seven years ago! But, guess what?!?! We still play it! Not because my son still needs to work on his multiplication facts but because we both find it fun! You might find it that fun too!

Here’s my speedy review of Speed!

I will also include info on the

CLARITY LEVEL: ♥♥♥♥_ It’s a very simple game. Very. It’s basically skip-counting up and down and playing cards that match those numbers. And trying to do it quickly. The instructions are clear and fairly concise. But there is one thing that is not very clear with this game…the font! They chose some rather fancy font for the numbers in the corners of each card, which is what you need to reference constantly and quickly. The combo of the fancy font, white text and thin black outline makes some of the numbers hard to read. And it was not just my tired, older eyes that found this true. My son, with his perfect vision and stellar sleep habits, had a hard time reading them too.   CLARITY LEVEL SCORE: 4/5 ♥♥♥♥_ 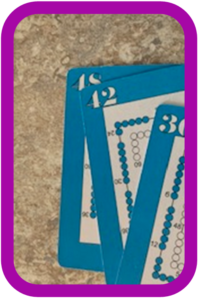 FUN FACTOR: ♥♥♥♥♥ The tagline is “Learn Multiplication the Fun Way,” and I gotta say this is a fun way to practice those pesky multiplication facts! It’s speedy and simple! My son and his lack-luster multiplication skills would not have found it fun to be slaughtered by me each time we played but, because all of the increments are shown on each card, he could keep up with me quite easily!  FUN FACTOR SCORE: 5/5 ♥♥♥♥♥ 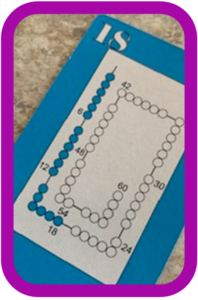 EDUCATIONAL VALUE: ♥♥♥♥_  Speed bills itself as “a two-person game that uses skip counting to teach multiplication. Speed is perfect for anyone {ages 3 to adult} who is learning about multiplication or wishes to learn to multiply faster.” And, I would say they are accurate in their self-description. I’m not sure I’d put this game in a three-year-old’s Easter basket but I would agree that any child who is interested in learning or needs to improve their skip counting, would find this game helpful! It’s especially nice that kids can practice each set separately but I do wish they included 10’s, 11’s and 12’s.  EDUCATIONAL VALUE SCORE: 4/5 ♥♥♥♥_

ORGANIZATIONAL COMPONENT: ♥♥♥_ _   I am sad to give Speed such a low score in this area but there are three issues.  First,  though the game box is small, sturdy and offers perfect color-coded organization, the individual boxes that hold each set of cards are thin and flimsy. They basically came apart upon the first use and needed to be reinforced with duct tape.  It’s not just a matter of preference, it’s imperative for gameplay to have the cards separated by type. Also, the instructions are small and appear to have been copied on a home printer so their lack-luster appearance makes them easy to lose and hard to find. Lastly, we were actually missing some cards from one of the sets. Not sure if it was a printing or packaging error but not having some of the cards made that particular round kind of tricky….like, it would never end! Once we figured out the issue, we could work around it, but it’s not something anybody likes to see in a game that costs more than $20.  ORGANIZATIONAL COMPONENT SCORE: 3/5 ♥♥♥_ _ 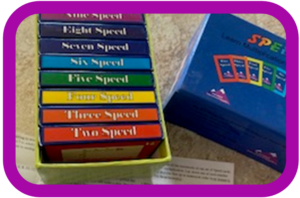 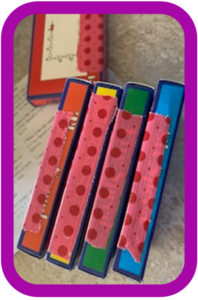 OVERALL SCORE: ♥♥♥♥_ Though this game earned some low points in a  couple of areas, it is still one we continue to play and one that I still recommend all the time!   OVERALL SCORE: 80% ♥♥♥♥_

If you are ready to “learn multiplication the fun way” with Speed, you can grab it here on Amazon.

If you want to look more closely at HOW to play Speed, keep reading….

STEP ONE: Select which set you want to play with. Choices are 2-9. We’re going to play with the sixes for this example. 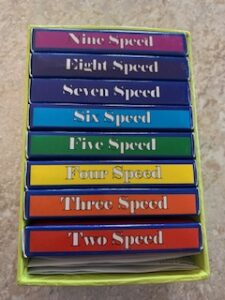 STEP THREE: Deal the entire deck out between the two players.

STEP FOUR: Each player turns over four of their cards in front of them in a row. 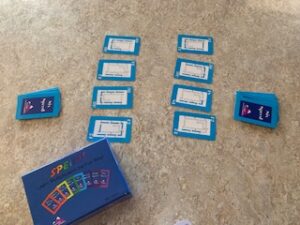 STEP FIVE: The game begins when each player flips one of the cards from his pile into the center of the two rows. 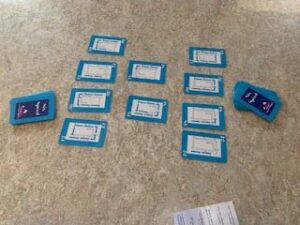 STEP SIX: From the row of four in front of them, each player uses cards to place on the two center cards. They can either go up one increment or down one increment. In the picture below, a player played a 42 on top of a 48 and then a 36 after that. Next, either a 42 could be played again or a 30. 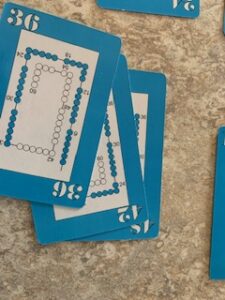 STEP SEVEN: As soon as a player plays a card from their row of four, they replace it from their pile.

STEP EIGHT: Play continues until somebody uses all of the cards in their pile.

And that’s it! Quick, easy and fun!

{If you come across a situation where nobody can play, there is a  fun way to get out of that jam but you can read about that in the instructions.}