Periodic is available on Amazon HERE.

Or, you can go here to get it directly from Genius Games. And use code TheWolfePack to save 20%!

{I purchased this game myself. All opinions are my own!}

Read on for a detailed REVIEW.

Periodic was recommended to me by the ever-so-helpful Amazon algorithm that correctly ascertained that I was on the hunt for some new science games.  The fact that it was not only a science game, but a chemistry game had me instantly intrigued.  Though another game we already owned and often played,  Valence, was also a chemisty game, it’s more of just a small card game. Periodic looked much more involved so I decided to give it a try with my 14-year-old who will be starting Chemistry this fall.

I will also include info on the

HOW TO WIN: Earn the most points in a variety of ways including researching elements, moving along the academic track and strategically using your agenda card.

ORGANIZATIONAL COMPONENT: ♥♥♥♥♥ Between the feel of the substantial box and the smell of newness as I opened it, I suspected I would find a high quality and highly organized game inside. And, I was not wrong! Periodic  consists of a variety of thick and sturdy pieces, a colorful and solid fold-out gameboard, three sets of glossy cards and two full-size booklets of info.  When new, some of the game pieces need to be punched out of a cardboard sheet. But unlike many other games, these pieces popped out perfectly and without any difficulty! And, the box even contained extra baggies to organize and store the pieces {THAT is a first for me!} Everything fits neatly in the box with a cardboard insert that helps keep the baggies of pieces and cards in place.  And the gameboard and booklets fit perfectly on top and it all gets secured with a tight-fitting lid.  I also need to acknowledge the aesthetic design of Periodic with its beautiful color palette and theme. It definitley has a full-on high quality vibe to it! But, our game wasn’t perfect; we did receive two green flasks and no pink flask, which was no biggie for us at all, but I suppose some siblings might find this as an excuse to fuss {similar to “he got the bigger piece of cake,” which I just consider an opportunity to adapt and grow…maybe that was the Genius Game’s intention, ha!}   ORGANIZATIONAL COMPONENT SCORE: 5/5 ♥♥♥♥♥ 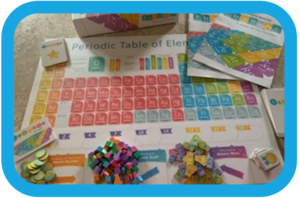 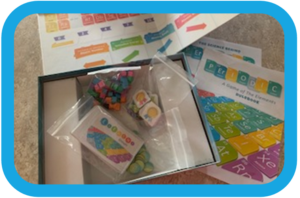 CLARITY LEVEL: ♥♥♥♥♥ I won’t even try to sugar-coat this; the instructions are massive for this game.  The rulebook is ten pages of full-sized paper filled with loads of steps and images. Granted, everything is organized and laid out logically with titles and sections. It’s just so much!  As my son was reading the rulebook to me, my brain was seriously doubting my decision to purchase this game. My son, on the other hand, was not discouraged and just kept going. He set the entire game up, which took at least 15 minutes in itself, and then he launched into trying to learn how to play.  I tried to follow along for a while and then I half-listened for a bit and eventually, I just settled on hoping that it would all make sense AS we played. And that’s exactly what happened! After reading it all, my son went first and walked us both through the steps he was taking. Then, when I took my first turn, we did the same thing. We actually continued to talk our way through the entire game because it helped us to not forget a step. We did have to reference the rulebook more than I care to admit,  but after a few turns, we knew enough about the game that the rest of the instructions made perfect sense and it all fit together. It really is a simple game to follow once you start.  Just know that as you read the rulebook, if you are feeling overwhelmed, don’t worry. It should all make sense as you play. And, though the information provided seems like it might be too much, it’s not. I applaud the team at Genius Games  for spelling it all out step-by-step, especially in such an organized fashion and with a generous font.  They also have an awesome 12-minute video that shows you how to play. But, I really want to reiterate…it’s MUCH easier to play the game than to try to understand the explanation of the game! CLARITY LEVEL SCORE: 5/5 ♥♥♥♥♥ 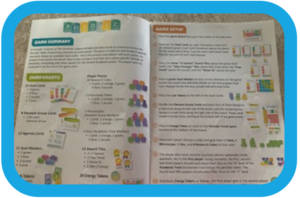 FUN FACTOR: ♥♥♥♥♥ Both my son and I enjoyed this game a lot! For him, I think he took great pleasure in plotting and planning how he could win. For me, I was just elated that I understood how to play and managed to not lose too badly. But, no matter the reason for our fun, we both definitely enjoyed playing! I’m not sure you’ll want to break this out for your next neighborhood block party but it is certainly a fun way to supplement your science lessons! FUN FACTOR SCORE: 5/5 ♥♥♥♥♥

EDUCATIONAL LEVEL: ♥♥♥♥♥ Even if you just go through the motions of playing, you’re sure to soak up some of the basics of the periodic table of elements. But, if you choose to pay closer attention to the actual moves you are making on the table of elements gameboard, you should pick up on some of  “the  fundamental principles in chemistry that can be derived from the structure and function of the periodic table,” as the publisher’s website says. Basically, as you move, you are either increasing/decreasing atomic number, increasing ionization energy, increasing atomic radii or increasing/decreasing atomic mass. It’s also a strategic game, which I do not usually enjoy, but of which my son is a serious fan! I’ll admit that if I had noticed the “strategy game” part of the description before buying it, I may have skipped it altogether. But, as it turns out, I actually really enjoyed it! Now, I did not apply very much strategy to my gameplay for our first attempt because just playing the basics was enough for my brain to manage, but my son went all out strategizing and thoroughly enjoyed it. {Guess who won?!?!} In addition to the rulebook, there is also a second booklet, The Science Behind, that is an awesome way to fortify  the educational value of the game. EDUCATIONAL LEVEL SCORE: 5/5 ♥♥♥♥♥ 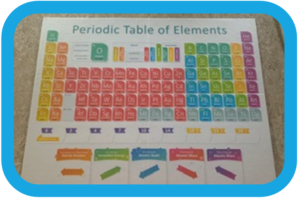 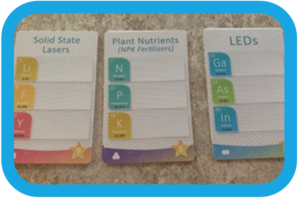 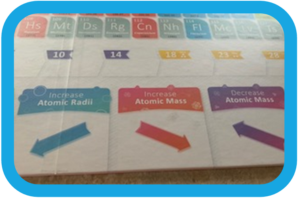 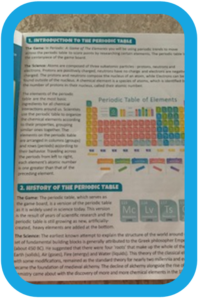 OVERALL SCORE: ♥♥♥♥♥  Though Periodic  requires more time to set-up and play than a lot of other educational games, making it not something you’ll throw at your kids when they finish lunch early and have 20 minutes to kill, my son and I both believe it’s well worth the extra time and energy spent.  It’s rather fun, somewhat different and definitley educational! OVERALL SCORE: 100% ♥♥♥♥♥

If you are in need {or want} of a “strategy board game designed around the periodic table of elements, as well as some of the most fundamental principles in chemistry that can be derived from the structure and function of the periodic table,” go here to grab it on Amazon or here to get it directly from the publisher {use code TheWolfePack to score 20% off!}

And if you would like to see how to play, check out the video below!