Animals are our son’s passion and at 12-years-old, he insists he wants to be a professional zookeeper when he grows up. In addition to driving him to his position as a volunteer animal caretaker at the local museum multiple times each week, my husband and I enjoy taking him to zoos, aquariums, sanctuaries, etc. Besides making memories for our little family, each experience provides new educational opportunities for our son and seems to cement his career choice even further. My professor-by-trade husband calls it “research”. I just call it fun!

We visited this zoo on a recent trip to celebrate my niece’s graduation from Sacramento State. After all of the festivities were over and the extended family had gone their separate ways, we had part of a day to spend in the area so we took the opportunity to enjoy a new zoo!

LOCATION: Sacramento, CA {south of downtown, just off I-5}

DESCRIPTION: The Sacramento Zoo first opened its doors in 1927 and was affectionately  referred to as “the little zoo in the park”. Its actual name was the William Land Park Zoo and housed about 40 animals on 4.2 acres of land. In the 1960’s, the zoo was enlarged to the 14.2 acres it is today and in 1970, it adopted the new name, the Sacramento Zoo. It is now a non-profit that houses more than 500 native, rare and endangered animals that represent over 120 unique species. They have a great selection of mammals including giraffes, zebras, lions, several different primates and a brand new {to them} okapi. They also just recently installed a great kid-level habitat for a mob of meerkats.  They also have a fantastic reptile house {that also includes fish and amphibians} and a wide variety of birds including a big flock of flamingos and some super loud parrots. 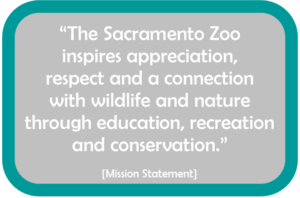 SIZE: This is a medium-sized zoo which took us two hours to explore thoroughly AND arrive early enough in order to be first in line to feed the giraffes. If we lived in the area, we would definitely become members so we could visit often.

ACCESS: Easy to walk with no hills or stairs. A few areas were muddy (it had rained the day before) so my flip-flops weren’t the best choice but not unsafe in any way. There were also a couple of instances that had confusing signage and/or were closed at the end of a path so we got “lost” a bit. Thankfully, because the zoo wasn’t too big, the backtracking we had to do was not extensive at all. 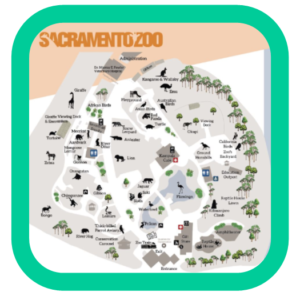 PARKING: Free! Because the Sac Zoo is located within William Land Park, along with many other fun things to do {Fairy Tale Town, lakes, ponds, rock gardens, golf course…} parking is plentiful but it seemed to consist of mostly parallel parking along the park roads. We had to walk a wee bit from the car to the zoo entrance but the park grounds are amazingly beautiful. We thoroughly enjoyed the variety of plants, flowers and bushes that we found along the way. I wish I had taken pictures but I was trying to conserve my phone’s battery. If we are able to visit this zoo again, I will be better prepared!

GIFT SHOP: The size of the gift shop was in-line with the size of the zoo. Our son, who firmly believes he needs a new stuffed animal every time we go to a new zoo, was thrilled to find a huge selection of nice animals and a “sale” going on. My rule is that any stuffed animal he buys at a zoo needs to be an animal he saw at said zoo and preferably one he does not already have. He chose a Sifaka and an Anteater. 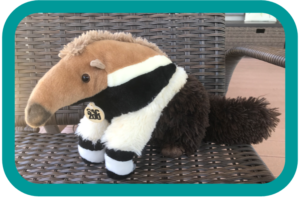 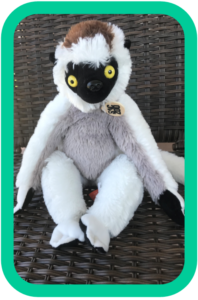 SPECIAL EXPERIENCE: {Giraffe Encounter} They offer this experience twice each day at 11:45 and 2pm. The cost is $5 {cash only} for one person to feed two small tree branches to a giraffe.  We arrived at the giraffe enclosure about 30 minutes early because I wanted to be sure we were early enough to ensure a spot. The waiting area is a huge shaded area that offers a nice view of the giraffes and also a backview of the zebras. The animal keeper arrived about 1:55pm and, before accepting any money, explained that the giraffes did NOT show any interest in eating during the earlier time slot {11:30} and had not shown any interest at all the day before. Apparently, the recent rain had created enough mud that not even a couple of tasty tree branches were enough incentive for the ungulates to get dirty. But, we were first up, and luckily we were greeted by the most lovely reticulated guy who seemed rather pleased with our offering.  He ambled over slowly but took no time in reaching for the branch that my son was offering. It took all I had to follow the zookeeper’s instructions to NOT reach out and touch that beautiful face. I just knew he had super soft lips like a horse does and he seemed soooooooooooooooo sweet. But, I resisted the temptation and took pics instead. The experience was well worth $5 and I would love to do it again! {NOTE: After our giraffe encounter was over, we still had some other animals to visit which looped us back near the giraffes about 30 minutes later. I noticed at that time, though people were waiting to feed them, no giraffes were approaching the area. I don’t know if they were all full or grew tired of the mud, but I am so glad we were in line first!} 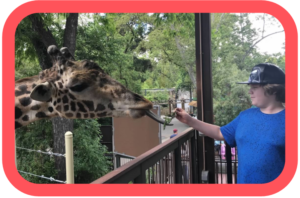 ENJOYMENT RATING: ♥♥♥♥♥ The simplicity of the footprint, the variety of animals and the giraffe encounter made for a wonderful experience. We would recommend this zoo to anybody who is wanting a traditional feeling zoo without the long lines and rigorous walks of a larger sized zoo. {Note: There are no elephants residing at the Sac Zoo so be sure your little ones aren’t expecting to view Dumbo during your visit.}

EDUCATION RATING: ♥♥♥♥♥  The Sac Zoo boasts about education  in their mission statement but it’s not just empty words with them! 1. During our relatively short visit, we encountered a zookeeper in front of the gift shop showing off an animal not just once, but twice! The zookeeper was friendly, patient and helpful. She answered our questions, listened to my son compare “his” animals {from his volunteer position} to hers and allowed us to touch them.  It was a very inviting experience and I was glad that she was there twice for us to enjoy.  2. Not only does the Sac Zoo clearly and accurately label their animal enclosures, they go beyond that by including some extra info about the particular animals on display. Two examples of that was a sign about the cougar’s missing tail and a “Keeper’s Notes” entry on a big whiteboard  explaining that the pair of gibbons we were looking at was actually a 47-year-old father/31-year-old daughter pair! And, many of their animals sported signs that explained when and where they had been born plus other funny facts like, “Pablo {the chimp} is everybody’s friend and doesn’t like too much drama”.   3. Their website is a treasure trove of educational info. It lists every animal residing at the Sac Zoo and includes a link to a PDF filled with loads of great info about each animal. 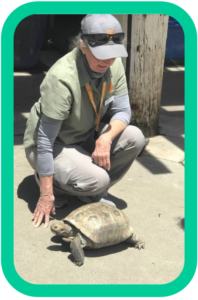 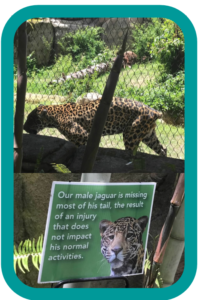 ENCLOSURE RATING: ♥♥♥♥_ The Sacramento Zoo has an unusually small footprint for a capital city.  As a result, many of the enclosures are smallish and a lot of ugly chain-link fence is still in use. But the animals seemed well taken care of content. Plus, there is a lot of current talk about relocating the zoo to a bigger location. Additional info on that hot topic can be found on their website.

CONCLUDING THOUGHTS: We thoroughly enjoyed our visit and would highly recommend it, especially to families with kids. It’s easy to explore, not too big or too busy, educationally engaging and offers a wide variety of animals!