Why do we CELEBRATE Columbus Day?

How do you decide WHAT to teach about Columbus?

Should you even BOTHER teaching about Columbus AT ALL?

Should I just IGNORE Columbus altogether since he’s so CONTROVERSIAL?

Did our teachers LIE to US?

Is this all just part of a larger CONSPIRACY?

What else is UNTRUE?

If you have not seen the heated debates, join most any homeschool group on Facebook and enter “CHRISTOPER COLUMBUS”  in the search bar. I can just about guarantee that it won’t come up with all warm and fuzzy comments and cute little crafts of ships made with paper and straws.

You’ll see comments that include:

As any seasoned HOMESCHOOL MOM knows, one of the most beautiful benefits of educating our kids at home is that we get to CHOOSE what we teach our kids. But as liberating  as that is for some moms, it is also stressful  for others {especially the newer homeschool mom.} The responsibility of what, when and how to teach can be felt as a burden  and some moms need help in answering those questions above.

I hardly paid attention in my high school history classes {sooooooooooooo boring} and I certainly don’t have a degree in history {I did marry a man with a MA in US History…maybe that counts for something, ha ha} so I won’t pretend to know the answers. But, I will tell you this…

I believe you should teach about COLUMBUS.

Here are three reasons why…

ONE: Columbus is a part of history, whether you like it or not.

Choosing what to teach in your homeschool is a lovely blessing but it is also an immense responsibility. We don’t get to shy away from all topics that make us uncomfortable. If we did, I would’ve skipped slavery, WW2 and Roe v Wade. But, it’s irresponsible for us to pick and choose to teach only what we like. In the very least, share only the established, meaningful facts and allow your kids to make a judgment call on his character later in life. But, teach about COLUMBUS.

TWO: It would be very hard to teach American history without including Columbus.

Without the inclusion of COLUMBUS in your explanation of the discovery of the New World, I’m not sure how you can present a full picture of American history. It’s undeniable that what COLUMBUS accomplished impacted other explorers which eventually led to the discovery, exploration and development of North America. Could we be sitting here if COLUMBUS had never set sail on the Ocean Blue in the year 1492? I suppose so. God could’ve used somebody else to make that trek. But, the fact remains that God chose COLUMBUS and COLUMBUS played an integral part in the history of our fair nation and it would be disingenuous to teach otherwise. Even if you simply include the most basic facts, you need to teach about COLUMBUS.

THREE: Columbus is the perfect example of God using an imperfect person.

Imperfect men in history are nearly as old as the world itself so cutting out all of their contributions would leave us with nothing. I’m assuming you have heard of Adam? He manages to still hold some merit in the shaping of our earth’s history even though he messed things up pretty quickly. King David? He murdered a man because he lusted after that man’s wife but he still receives a lot of attention for following God’s plans in other ways and making a lasting impact on God’s chosen people.

Let’s turn away from the Bible for a moment and consider other chunks of history. How many of our Founding Fathers were slaveholders? A quick Internet search indicates that there were DOUBLE the number of slaveholding Founding Fathers than not. How many presidents of our own beloved nation have made mistakes in times of war that have resulted in the loss of innocent lives? I can’t even begin to imagine but, without knowing top-secret CIA information, I can just about guarantee that every man that has ever held the position of President of the United States has made mistakes…some of which have resulted in generational-impacting consequences. Should we just pretend they never served as President and ignore their time in history? No, that would give us an incomplete picture of history.

The hard truth is that every man {except one} who has ever walked this earth has done bad things and made major mistakes. With the exception of one, every man who has ever taken a breath has been a sinner. Not one man, except Jesus, has been perfect. The hard truth is, COLUMBUS is in great company. Whether you choose to teach your kids about his human flaws, bad choices and unintended consequences is entirely up to you but I do believe you should teach about COLUMBUS.

What do you think? Do you plan to teach your kids about CHRISTOPHER COLUMBUS?

For a very basic explanation of CHRISTOPHER COLUMBUS, check out this fun Rebus Story for early readers. 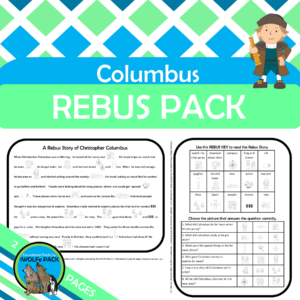 You can get it free in my store here.

And if you want to cover the voyage of CHRISTOPHER COLUMBUS in more humorous and honest detail, check out