Professor Noggin’s Presidents of the U.S. is available on Amazon HERE.

Read on for a detailed REVIEW.

Let me just start by saying that Professor Noggin has a HUGE selection of EDUCATIONAL CARD GAMES. They all use the same premise with the same rules. {They even all come in the same type of box which stack together perfectly.} So once you learn the rules and realize the VALUE in her games, you might get hooked {like us!}

This REVIEW pertains to the President of the United States version but would apply across the board to Noggin’s other offerings.

TIME COMMITMENT {because mine is limited},

AGES: 7+ {or anybody who has learned some historical presidential facts and/or can read the cards to learn them as they go}

HOW TO WIN: Be the player with the most cards by answering the most questions correctly.

CLARITY LEVEL: ♥♥♥♥♥ The instructions are super simple and explain the game clearly. We never needed to reference the instructions after we started playing. Score 5/5 ♥♥♥♥♥ 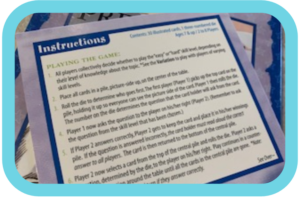 FUN FACTOR: ♥♥♥♥_ This is a fun, little game! Turns are fast and simple. And you can modify it to make it fun for multiple ages/skill levels by selecting Easy, Hard or a mixed version. We only scored it 4/5, though, because your kids probably won’t select this for Family Game Night next Friday.  But, it is a fun way to practice/learn facts about the presidents! Score 4/5  ♥♥♥♥_

EDUCATIONAL VALUE: ♥♥♥♥♥ The entire game is all about historical facts regarding United States’ Presidents so the educational value is high. Obviously, some facts hold more historical significance than others {some could be considered more like “fun trivia”} but everything pertains to the  subject of our presidents. Each card has its own topic which includes: Presidential Firsts, Who Was President When, Where Are They From, Slogans,First Ladies and more. Several cards are also specific to one particular president. No matter which card you draw, though, it will pertain to a U.S. President and it will be educational.  Score 5/5♥♥♥♥♥ 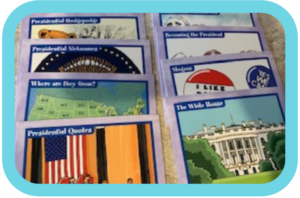 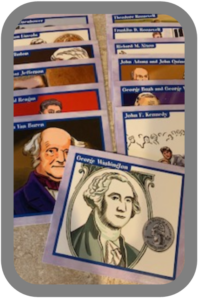 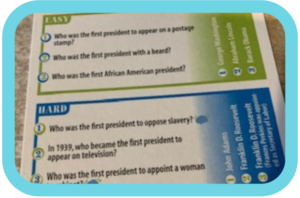 ORGANIZATIONAL COMPONENT: ♥♥♥♥♥ The card game comes in a sturdy, little box which contains one die, 30 came cards and one instruction card. The cards are thick and strong. The components are minimal and very easy to keep organized. Score 5/5 ♥♥♥♥♥ 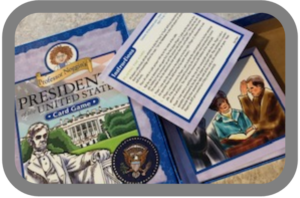 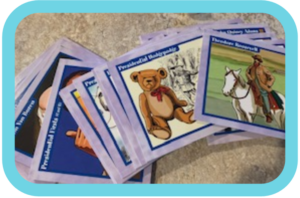 OVERALL SCORE: ♥♥♥♥♥ We enjoy many of Professor Noggin’s games as a fun component of our school day and this U.S. Presidents version has been a great addition. It’s quick, fun and educational. And, if, like me, you don’t recall much from your own history classes {way back when,} no worries. Just use the cards as learning tools instead and learn while you play. You’ll probably lose to your kids, but that’s okay. When everybody learns, everybody wins! Score 5/5  ♥♥♥♥♥

If you are ready to offer your kids a  fun and easy way to work on their presidential facts, you can buy the game here on Amazon.

2. Put the cards in a stack in the center. 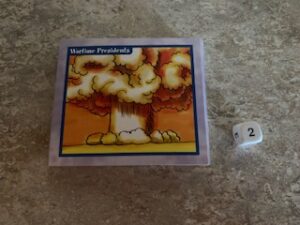 3. Decide if you are going to play EASY, HARD or a mix of the two. You can easily play a mix if you have some players who are more advanced than others. Just assign those players the HARD questions and the beginner players get the EASY questions.

4. Decide who will go first. Player One rolls the die.

5. Player One draws the card from the top of the stack. 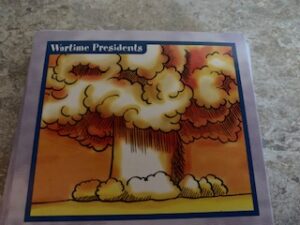 6. Player One shows everybody the topic on the card.

7. Player One looks at the die{1, 2, 3} and reads the corresponding question {1, 2, 3} on the card to Player Two {the person to his/her right.} Player One needs to make sure he/she is reading the assigned level for Player Two {Easy/Hard.} 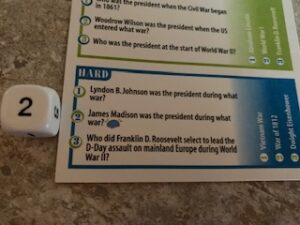 9. If Player Two is correct, he/she gets to put the card in his/her own pile.

10. If Player Two is incorrect, Player One reads the answer out loud and then the card is placed on the bottom of the stack.

12. Repeat steps 5-11 rotating through the Players until all of the cards have been correctly answered {or you decide to stop. It’s super easy to stop at any given point and call the game over.} 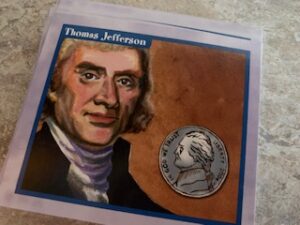 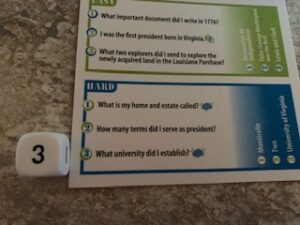 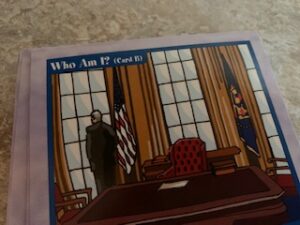 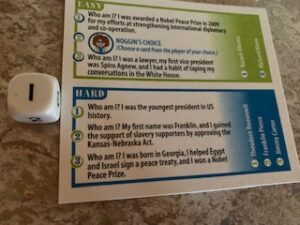 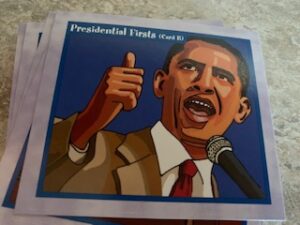 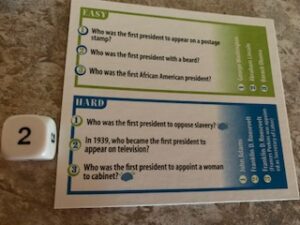 13. The player with the most cards at the end, wins the game {which, not surprisingly, was my son.} 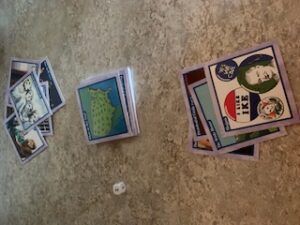 ***If a corresponding question is labeled “NOGGIN’S CHOICE”, that Player does not need to answer the question. Instead, he/she gets to steal a card from another Player’s pile and add it to his/her own. 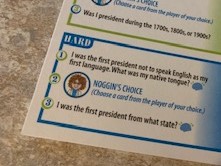 Looking for something else? I have loads of Game Reviews! Here are just a few…