My son began his 8th Grade year as a homeschooler this month. I’ve always designed his yearly curriculum using an eclectic approach, mostly with the intent of catering to his strengths while moving his weaknesses forward {sometimes we moved things along slower than I care to admit.}

As I was planning this school year, I finally forced myself to stop denying the fact that I only have five years left with him at home and decided it would be wise to consider what he will need for his High School transcript before making my curriculum selections.

Considering he wants to major in Zoology in college, there are very specific math and science courses he needs to take in High School, which means there was some very specific prep work we needed to do this year.

We’ve always done a full school schedule that included math, science, history, language arts, writing, Bible as well as some additional electives. And, for the most part, I’ve felt more than capable of instructing him. Until now. With the weighted importance of High School looming just one year away, I decided that it was time to outsource a couple of the more important subjects that were beyond my personal skillset as a teacher.

This realization led me to enroll him in a live, online General Science class designed for Middle Schoolers. There are all sorts of online classes available in every subject imaginable with 1,000 different models and approaches. Some are laid-back and more fun than anything. Some are pre-recorded and “work at your own pace.” But I selected a rather rigorous course with a more traditional educational approach.

The class meets weekly for 90 minutes and there is substantial homework for the other four days. The entire experience consists of loads of reading,  hands-on experiments, timed tests, note-taking and live lectures.

In just three weeks of taking this class, our son has learned a tremendous amount. Way more than I could’ve successfully taught him using just the book, my ability to skim chapters and my penciled-out schedule.

In addition to learning about the history of science, how to form a hypothesis and how the scientific process both succeeds and fails, he has also learned some very valuable LIFE LESSONS in just three weeks. Lessons that he needed to learn. Lessons that would’ve been really hard to teach him on my own. Lessons that I didn’t know he needed. But, thankfully, important life lessons that this General Science class seems determined to teach him {though I doubt the instructor planned as such!}

HOW TO RESPECT THE HONOR SYSTEM

Obviously with Mom as your teacher and being an only child, it’s pretty hard to lie and get away with saying you did your work when you didn’t. Even if you are a homeschool kid with six siblings, I think it would still be pretty hard to get away with lying about your work…certainly harder than if you were a public school kid with 29 other classmates to distract your teacher.

But, as is common among some styles of live, online classes, students don’t have to submit proof that they finished every assignment. Sometimes they simply have to click a button that says, “Yes, I performed Experiment 2.3 and completed the lab report.”

The first time this popped up as the way to submit his weekly assignment, my son clicked “yes” and then turned to me and asked “but how will my teacher know if I actually did it?” “Ummmmm,” I floundered a bit and then brilliantly said, “she won’t, but you will.” 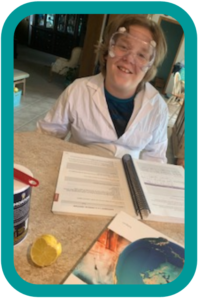 And this opened up the opportunity for a discussion regarding the HONOR SYSTEM. We talked about how being dishonest will always hurt you to a degree, even if other people never find out.  And in circumstances that involve reading, learning, etc, it’s definitely going to hurt you in the long run.

Not only will it hurt because it can {hopefully} cause guilt and shame, but it will compound over time. If you don’t do the reading or complete the assignment, you aren’t learning the material. If you don’t learn the material, you won’t do well on the tests. But, more importantly, you have missed the opportunity to LEARN something new, GROW as a student and ADD to who you are. And then you chose to lie about it.

We kept the conversation going and covered other parts of life where the HONOR SYSTEM might come into play. Will I know that he didn’t feed the dog when he said that he did? No, but his dog, CoCo, will know and she’ll be hungry. And it will be because he was not honest.

Will the librarian know if he takes 4 books when the sign said “One free book per kid”? Not unless she’s watching. But the last three kids who want a free book will “know” because they won’t have a free book to take home. And, it will be because he was not honest.

Will his college prof know that he hasn’t completed his individual assignments leading up to the major group project? No, but when it’s time for the group project to be turned in, his groupmates will know and their grade will suffer. And it will be because he was not honest.

That’s a big LIFE LESSON that we were able to begin to tackle,  all thanks to his live, online general science class.

HOW TO TAKE A TIMED, ONLINE TEST

This LIFE LESSON might seem nominally important compared to learning HOW TO RESPECT THE HONOR SYSTEM but, in today’s day and age, knowing HOW TO TAKE A TIMED, ONLINE TEST is most assuredly a LIFE LESSON that our kids need to master at some point. Whether it’s taking an online college course, trying to earn advantage points for a reduced health insurance premium or attempting to avoid a penalty after a speeding ticket, knowing how to negotiate an online test is pretty much imperative these days.

For my son’s live, online class, he will need to take a total of 23 online tests. The first two tests are open-book and untimed but then he’ll need to transition to timed, close-booked tests.  Strangely enough, he was very excited to take the first test last week. In fact, he was so excited that he got up early and started his test at 8am on his own! But then he had to go to his volunteer job and didn’t return to the test for seven hours! So, by the time he completed the entire test, the exam clock had run for more than EIGHT HOURS. 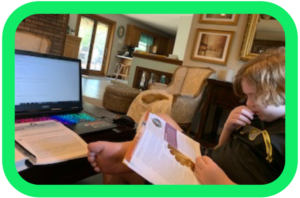 THE AFTERNOON PORTION OF HIS FIRST TEST 😉

Of course, we emailed the teacher and explained the situation. She found it as humorous as we did and explained that she fully expects a learning curve for the procedures of the class. I’m just glad he has begun the mastery process of HOW TO TAKE A TIMED, ONLINE TEST now at the age of 12, as opposed to as an 18 year old in college {when his professor might not find it nearly as funny!}

HOW TO MANAGE HIS TIME

Our homeschool calendar has always been what I would term “firm, yet flexible.”  I plan out the entire year in advance and assign things by the week with the full expectation that my son will accomplish them within that time frame. But, I am also flexible in the sense that if life gets in the way, a certain subject is taking longer than expected or his teacher {aka: me} hasn’t quite finished printing the necessary pages, I can just break out my erasable pen and re-work the calendar. I have done this more times than I can count.

But that’s not quite the case when enrolled in a live, online class. The assignment calendar is set at the start of the semester and provided to the entire class. Every student needs to keep up with the calendar or suffer the consequences of missed assignments and bad grades.

As soon as I saw the calendar of assignments for my son’s class, I was reminded of my college days and the euphoric feeling that would come over me when I got my hands on a class syllabus for the first time. I LOVED knowing what was due when and plotting it out in my planner.  LOVED it. I’m sure that’s not true for some people. It certainly hasn’t been true for my son. Then again, he’s only 12. He’s got time to acquire that weird love of making a list of things to do and then crossing them off as you get them done. Maybe he’ll never develop a love of the syllabus and to do list like me but he does need to learn HOW TO MANAGE HIS TIME.

And, what better way to learn it than through a live, online class? {It’s definitely a much better way than to have his mom, or worse yet, his future wife nagging him constantly.} 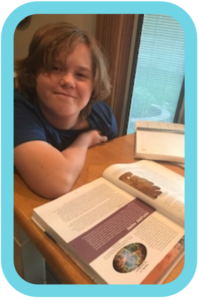 And that’s what he did. I won’t pretend there wasn’t at least a little whining and complaining about getting up early and doing school on a Saturday, but he did it. He knew that if he didn’t get it done on Saturday, he would be behind on his Monday and Tuesday assignments and would not be prepped for the live, online class on Wednesday afternoon.

So, he got it done. He caught up by working on Saturday morning and learned a valuable LIFE LESSON…HOW TO MANAGE HIS TIME!

But more important than worrying about his academics,  I have doubted whether I was giving my only child enough socialization. I have doubted whether we have focused on the right life skills. I have worried that I don’t even know everything that I need to teach {so how can I possibly make sure he learns it?}

But then I step back and take comfort in remembering that homeschooling is a journey. It takes a massive compilation of thousands of individual academic and life skills to create a fully functioning homeschool graduate.

For his 8th Grade year, in addition to Pre-Algebra, World Geography and the New Testament, my son is also learning how to do laundry, how to bake cookies/cakes and how to feed/care for bats, snapping turtles and mudskippers {that’s his volunteer job}.

And, apparently, he is also learning HOW TO RESPECT THE HONOR SYSTEM, HOW TO TAKE A TIMED, ONLINE TEST and HOW TO MANAGE HIS TIME! {Not that I planned any of that, but I’ll gladly take it!}