As you probably know by now, we LOVE board games including games that transcend into the category of educational games.

In true Homeschool Mom fashion, I often pick an educational game that allows my son to practice in an area in which he struggles {like math or spelling.}

But we also have quite a collection of other educational games that cover subjects in which he excels {like history, geography and Bible.}

One of his favorite geography games is Game of the States.

NAME: Game of the States

CATEGORY: Geography {plus some math}

SUB CATEGORIES: Location of states in relation to others; Main products of each state; State capitals; Business transactions {profit/loss};  Other random facts about each state

HOW TO WIN: Be the player with the most money at the end!

CLARITY LEVEL: ♥♥♥♥♥ When you first read the instructions, the game may seem confusing but, I promise it is not. It’s actually rather simple. The instructions are clear and concise. They explain how to start, what to do and how to win in very concrete terms. They also provide a modified version for younger kids. CLARITY LEVEL SCORE: 5/5♥♥♥♥♥ 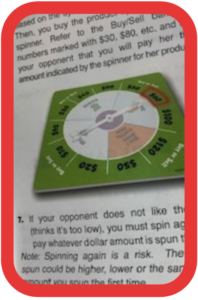 FUN FACTOR: ♥♥♥♥♥ Very little skill is needed to play this game. Even non-readers can play if there is at least one reader on-hand. Players need to be able to draw a card, find the state on the map, spin the spinner, count spaces and count out money. But none of it needs to be done with speed or even independently so, really, it should be a fun experience for everyone! Learning takes place along the way but winning is NOT based on what a player learns. Winning is based mostly on luck with a tiny bit of “strategic luck” {I just made that term up but it sounds better than gambling or choosing when to push/not push your luck, ha ha.} FUN FACTOR SCORE: 5/5 ♥♥♥♥♥ 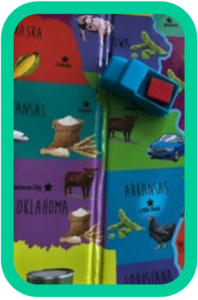 EDUCATIONAL VALUE: ♥♥♥♥♥ Though very little skill is needed to play or win this game, the educational value is fairly high because learning takes place along the entire way. Players need to place their truck on a specified state and then they will need to move their truck to a different state, space by space. So, geographic realizations of how close/far some states are from one another are nearly guaranteed. Players also need to buy and sell products from particular states so will learn about state-specific commerce along with the business strategy of “buy low/sell high.” There are also the optional STEM facts that can be read for each state, naming the capitals and other random fun facts…all found on the cards. EDUCATIONAL VALUE SCORE: 5/5 ♥♥♥♥♥ 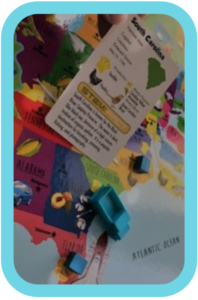 ORGANIZATIONAL COMPONENT: ♥♥♥♥_The storage box, cards, spinner, money and board are all very sturdy and have held up well so far. Everything fits in the box, though there are not individual sections so it would’ve turned into a  jumbled mess had I not solved the problem by using small plastic baggies.   The instructions are in a separate little booklet so be sure not to lose it. ORGANIZATIONAL COMPONENT SCORE: 4/5 ♥♥♥♥_ 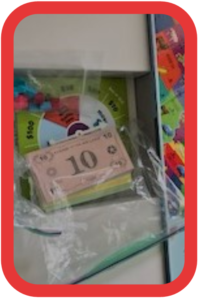 OVERALL SCORE: ♥♥♥♥♥ US Geography is something that comes easily for my son {but not me, ha ha} so this is not a game I often suggest we play but we always have loads of fun when we play it! It seems much less like an educational game than many others we have because the game is NOT dependent on what you know/learn. We both highly recommend this game for all ages and skill levels. OVERALL SCORE: 95% ♥♥♥♥♥

If you are ready to offer your kids a fast and fun way to learn US Geography {along with some fun facts, a wee bit of business sense and some basic math}, you can buy the  Game of the States on Amazon by clicking here!

1. Unfold the game board and position it so all players can see. 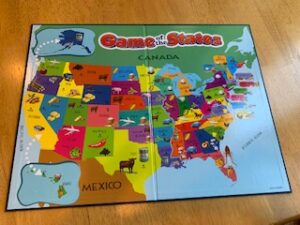 2. Each player chooses one truck and four matching packages. 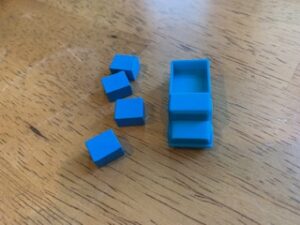 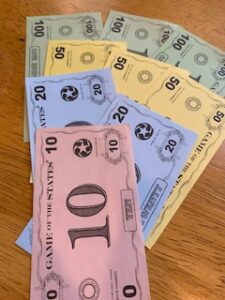 4. Shuffle the 50 state cards and place them face down next to the board so all players can see them. 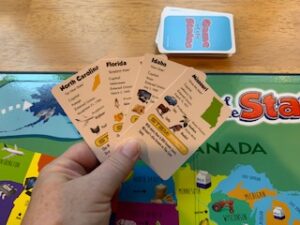 6. For every state card drawn, each player places one of his/her colored packages on that state on the game board. 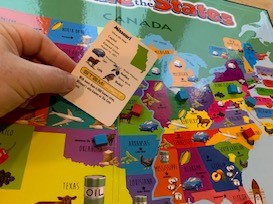 7. As an optional educational opportunity, each STEM fact can be read as a package is placed on that state. 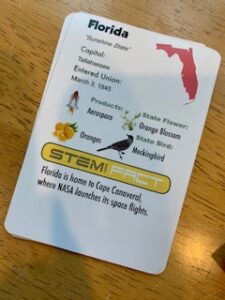 8. After all packages have been placed, the cards are returned to the bottom of the pile.

10. Each player places their truck on that state. This is the starting position for each truck. 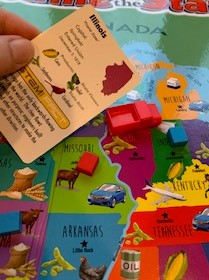 11. Return these cards to the bottom of the pile as well.

12. Each player spins the spinner. The highest spin goes first {Traffic Jam counts as “0”.} {We’ll pretend that “PLAYER BLUE” got the highest number and will be going first.}

13. “PLAYER BLUE” spins and moves his/her truck that number of spaces. The goal is to move to a state that has an opponent’s package. 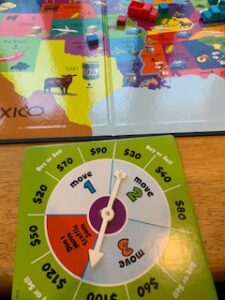 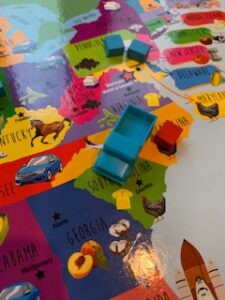 14. Each state is one space. In order to move from one to state to another, they need to share a border. You do NOT need to land on a state with an exact count. {See the instructions for more details about moving spaces.}

15. Once “PLAYER BLUE” reaches a state with an opponent’s package, ask what product he/she has for sale. The opponent decides what to sell based on the symbols found on that state on the game board. 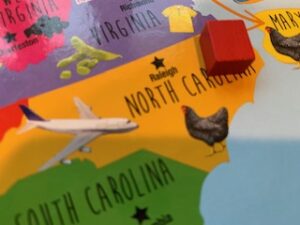 16. “PLAYER BLUE” buys the product by spinning the spinner. Whatever it lands on, the opponent can decide he/she wants to risk another spin and hope for more. Or he/she can accept the amount of the first spin. This decision is up to the opponent. But if he/she chooses a second spin, that is the amount “PLAYER BLUE” needs to pay. 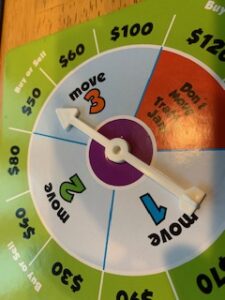 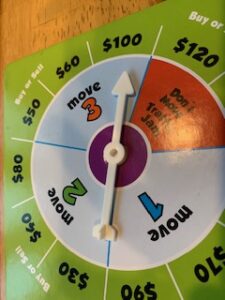 17. Once the amount is decided on, “PLAYER BLUE” pays the opponent for that package. 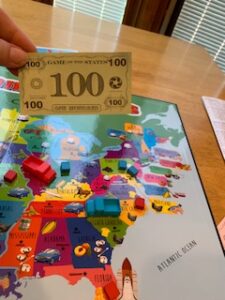 18.”PLAYER BLUE” puts that package in his/her truck and draws a new card. This is where “PLAYER BLUE” is going to deliver and sell the package. 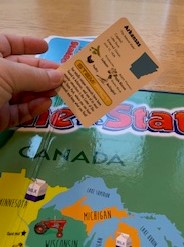 20. When it’s “PLAYER BLUE’S” turn again, spin and move toward the state found on his/her card.

21. When “PLAYER BLUE” reaches that state, he/she needs to sell the product to the bank. Spin the spinner to see how much the bank is willing to pay. “PLAYER BLUE” can either take that amount or can risk one more spin and hope for more. But if “PLAYER BLUE” spins a second time, that is the final price “PLAYER BLUE” will be paid. 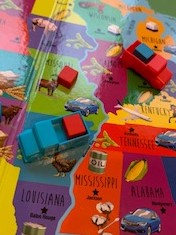 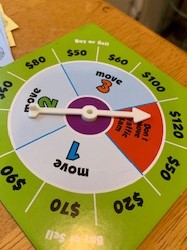 22. Once an amount is decided upon, the bank pays “PLAYER BLUE” for the package. 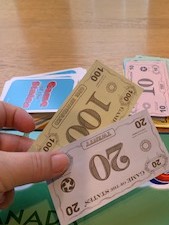 23. Put the package in the box and return that state card to the bottom of the pile. “PLAYER BLUE’S” turn is now over.

25. When it’s “PLAYER BLUE’S turn again, he/she spins and moves toward another package that belongs to an opponent.

26. Repeat steps 13-25 until all packages have been purchased and delivered.

27. Whoever has the most money when the game is over, is the WINNER! 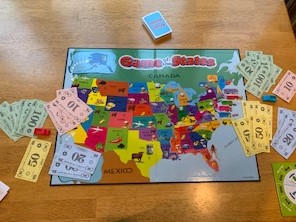 For more game reviews, check out