We LOVE nearly all types of board games and we will often spend a weekday afternoon playing an educational game. And since my son HATES math,  I often supplement his math lessons with a fun math game. Now, I won’t pretend that playing a math game is nearly as fun as playing Uno Dare or Uno Attack {because both of those games are super duper fun!} but I will say that playing Four Way Countdown is a rather enjoyable way to practice all four mathematical operations  at one time.

So, let me tell you all about one of our favorite math games!

HOW TO WIN: Be the first to flip all of your wooden keys down by solving simple math problems with the numbers rolled on the dice. 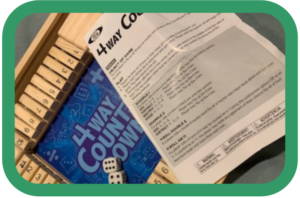 FUN FACTOR: ♥♥♥♥♥ One of the things that makes this a FUN game is the fact that it is NOT based on speed at all which means UNequally matched opponents can play well together. It does not matter how quickly a player identifies the possible answers to flip down a wooden key. As long as the opponents have some semblance of patience, each player can take as much time as needed. Plus, there is a way to sabotage an opponent so even the least-skilled player can easily dominate. But, be careful, there is also one way to sabotage yourself. Instead of skill, luck has a lot to do with who wins! So, it can truly be fun for ANYONE! FUN FACTOR SCORE: 5/5 ♥♥♥♥♥

EDUCATIONAL VALUE: ♥♥♥♥♥ The  best part of this game is that it allows practice of  all four  operations: ADDITION, SUBTRACTION, MULTIPLICATION and DIVISION. Few games can boast that players will be able to practice all four operations at once so this game definitely ranks as high as possible in its educational value. The instructions also include a Junior Version of the game which modifies it for younger kids so it truly would be educational for all. Additionally, we modified the game to be more challenging by adding numbers 11-20 to the wooden keys. This allowed us to utilize more complex math equations {but it did mean we permanently modified the game so it can only be played by two people, though there is probably a way to do add those numbers temporarily. More details on that below.} EDUCATIONAL VALUE SCORE: 5/5 ♥♥♥♥♥ 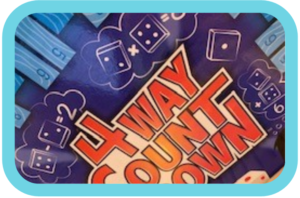 ORGANIZATIONAL COMPONENT: ♥♥♥♥♥ The box is wooden with a great lid that easily slides on/off. The keys are built in and well made. The dice fit inside of the center of the box, along with the instructions. Granted, the dice roll around and the instructions could get lost but the box’s construction is outstanding and very secure. I seriously wish all of our games were contained in wooden boxes! ORGANIZATIONAL COMPONENT SCORE: 5/5 ♥♥♥♥♥ 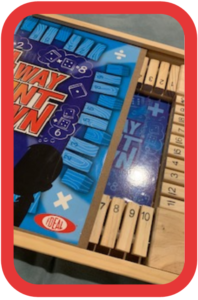 OVERALL SCORE: ♥♥♥♥♥ As I have shared before, math is not my son’s favorite subject so I try to implement math games as often as possible. This allows for practice of the necessary skills but in a fun, non-threatening  way. We have a variety of math games but Four Way Countdown is the only one that allows practice of all four operations {ADDITION, SUBTRACTION, MULTIPLICATION and DIVISION} at one time. The value of that is incredible! It is also a very fun and quick game that both my son and I enjoy so it receives the highest rating from us both! OVERALL SCORE: 100% ♥♥♥♥♥

If you are ready to offer your kids a really fun way to practice all four math operations while having fun, you can buy the game here on Amazon.

{PLEASE NOTE: These instructions include our own modified version, which we created by simply assigning TWO rows of keys to each player. One row remains 1-10 but the other row is modified to include keys 11, 12, 15, 16, 18, 20 with 3, 4, 7, 9 staying untouched. This allowed for more complicated math calculations while adding another level of complexity due to the change in probability of rolling specific numbers. If you choose to do this, please note that ONLY TWO PLAYERS can play. If you choose to leave the game “as is,” the instructions below still remain applicable…you’ll just need to ignore the Sharpied-numbers on some of the keys.}

2. Decide which row of keys will belong to each player.

4. Player One rolls the dice.

6. Player One needs to complete all four math operations using 5 and 2. 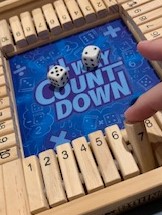 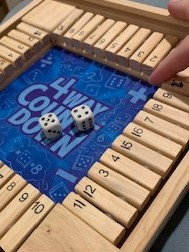 14. Player One needs to complete all four math operations using 4 and 6. 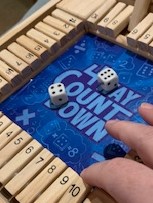 17. Play repeats until a player flips all of their keys up BUT….

18. if a player rolls 6 and 6, that player must flip ALL of his keys back down and start over.

make another player flip ALL of his keys back down. 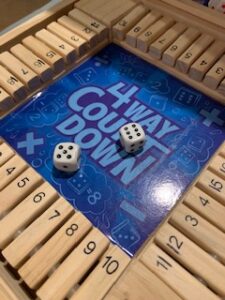 20. The first player to flip all of his/her keys up, is the WINNER!

Four-Way Countdown has been renamed and repackaged as Shut the Box, but it is the same game. Check it out below!

For more GAME REVIEWS, you might want to check out