I just spent TWO HOURS looking for a thing that never existed. Yes, that’s what I did. TWO HOURS. Why?

Well, clearly, I thought this thing existed but I could not find it.  And I cannot stand misplacing things. Especially when the thing is part of a set.

And that’s what this thing was. It was one thing of a twelve-thing set and I could not find it anywhere.

Worse yet, it was part of a family tradition that I have done with my son every Easter for as long as I can remember.

Yes, he’s 14 and not really the chunky kid that I used to force into sweater vests for Easter Sunday.

But, he’s still our kid and, before we know it, he’ll be out of the house.

So, I’m going to do these holiday traditions as long as I possibly can.

That is why I spent two hours looking for this missing thing.

See, every year, we start celebrating Easter 12 days before Easter.

We start with a dozen plastic eggs. 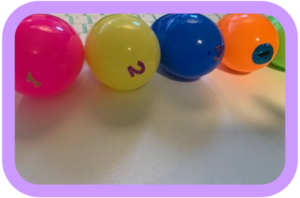 And inside each egg is one of these things.

These things are actually little printed images on one side with a Bible verse on the other. They are nothing fancy.

Seriously, it’s a little picture on one side and then my Sharpie-written note on the other. The note says to read a particular Bible verse. And this little thing is shoved inside a plastic egg {along with a piece of candy, of course.} 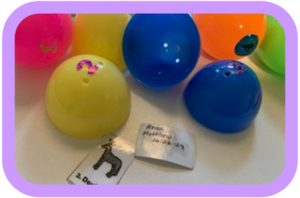 But these little things tell the Easter story when read in order.

You’ve probably seen the idea or even done some version of it yourself.

Day One: Image of the Bible on one side, and the other side says, “Turn to the Gospels and be ready to read the Easter Story.”

And so forth and so on. These things go all the way through praying in the garden, to placing the crown of thorns on his Jesus’ head to dying on the cross….

It’s a fun little tradition that helps us focus on the Easter story and I’ve loved doing it with my son for years! And I wanted to do it again this year!

But, when I started to get the things ready, I could not find one of the things.

I had the 12 eggs…all labeled with mismatching stickers and in random colors {told ya, nothing fancy!}

So, I searched and searched for that blasted missing thing. I dug to the bottom of the “spring tubs” where the eggs had been stored. I even weeded through the annoying Easter grass in my son’s Star Wars basket, hoping it had slipped to the bottom last year.  I got on my hands and knees and searched under the shelves in the storage area in the basement.

But, it was nowhere to be found.

After two hours, I finally gave up.

I would just have to admit defeat and make a new thing to replace the missing thing.

So, I sat down with the 12 eggs, the 11 things and also the little paper that reminds me where each thing is supposed to go.

{I mean, you cannot do them out of order or the Easter story would be messed up. So, I have this cheat sheet to remind me of what goes where.} 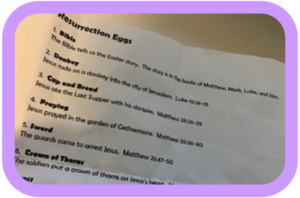 And that’s when I discovered that not only had I wasted two hours looking for this thing, I had quite literally missed the ENTIRE POINT of Easter in the process.

See, the thing I was missing was number 11. I had nothing to put in the eleventh egg.

Well, guess what? There is NOTHING to put in that egg and there never was. Why?

Here. Read the instructions yourself. 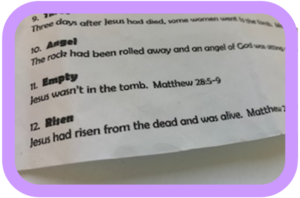 Yeah. The eleventh egg is supposed to be EMPTY! Why?

Because the pancake-flippin’ TOMB was EMPTY!

Of course I knew that but I was so preoccupied with recreating this family tradition {while also being slightly obsessed with not wanting to admit that I had lost something,} I was missing the entire point of Easter.

This holiday tradition is not just about making memories for our son. We want to remind him that Jesus not only died for his sins but that Jesus defeated death and rose from the grave!

It’s so easy to focus on the fact that Christ died for our sins. And He did. My word, did He ever! Thank GOD, He did that!

But, the Easter story does not end with the seventh egg. Don’t ever stop there! You have to keep reading. Because guess what?!?!

The thing about Easter is that

the pancake-flippin’ TOMB was EMPTY! 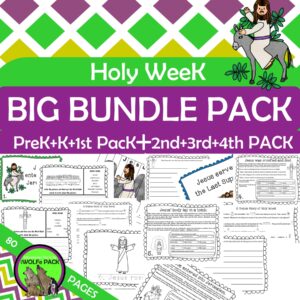