There are so many advantages to homeschooling our children.

We get to choose what curricula to use, when to bump up a level and when to back off.

We get to do Bible every day, math every other day and history twice each day {if we want.}

We get to structure our days exactly how it works best for our kids. We can start late in the day and teach through dinner. Or we can start at 6am and be done before The Price is Right comes on.

We can pursue something unique that triggers our kid’s fancy, we can alter what we read in books or we can skip topics altogether.

We are blessed to grow extra close relationships with our kids all the while helping them learn and grow and mature.

But, another MAJOR benefit that recently struck me as an ENORMOUS BONUS that cannot be matched via any other educational option is

being able to structure their education NOW to meet up with their career goals LATER in life.

I only have one example to offer but I am completely and utterly positive that there are a gazillion examples of how to make this work for YOUR KID.

Our son, who is now 12, has wanted to be a zookeeper FORbasicallyEVER.

Now, a LOT of kids like animals and many seem to really LOVE them so none of this surprised us. We catered to his likes by visiting zoos in multiple cities and states, taking him to live animal shows and watching several reality-based zoo shows as a family.

Like most parents, we unconsciously assumed he would change his mind, but, his childhood dream hasn’t waned at all. He simply wants to be a zookeeper.

While he was in the middle of his Seventh Grade year, my husband decided to begin researching the path to zookeepering. And, one of the biggest surprises that we discovered was the suggestion {made by many renowned professionals in the field of animal keeping} that young adults need to have SIGNIFICANT VOLUNTEER TIME under their belts before they can even begin to dream of applying for a paid zookeeper gig.

Now, I’ll admit. This suggestion of SIGNIFICANT VOLUNTEER TIME gave me visions of a college graduate living in my basement for years while he schlepped down to the local animal shelter or maybe shoveling stalls at a nearby farm.

But then I had the realization that this kid of ours can start volunteering NOW. He’s only 12. But he has the time and he has the dream. So, I did some quick thinking (not a lot of options in our smallish town, which is located no closer than 90 miles from an actual zoo,) and I landed on our local museum that just so happens to have

more snakes than I want to acknowledge,

a couple of water monitors,

a pair of red slider turtles

{because they purposely breed them to feed everything above.} 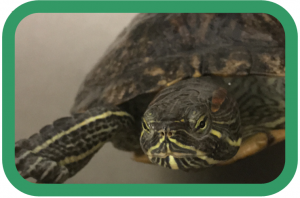 So, I made some calls on Wednesday, our son had his first ever interview on Friday and he began “work” Monday morning at 9am!

He now spends about 6-8 hours each week helping care for this menagerie of animals and working toward his dream job!

He’s ONLY 12 years old and is actually actively working towards his career goal!

I think that is an ENORMOUS BONUS of homeschooling! Don’t you?