Flip It is available on Amazon HERE.

My family has always loved board games so using them in our homeschool was a natural fit but finding good educational games  isn’t nearly as easy as one might think.

The Christmas toy catalogs and my FaceBook feed are always filled with fun, trendy board games for the family including new versions of classics  {Star Wars Monopoly} and weird, silly things {Pie Face Showdown} but it’s very rare to find  educational  games  being promoted outside of homeschool catalogs.  And, if you’re like me, when I am pouring over a big stack of homeschool catalogs, it’s agonizing enough to find the right curricula choices. I have no extra brain energy to find fun educational games too.

HOW TO WIN: Be the first to flip all 12 of your cards over by finding the matching multiplication factors.

CLARITY LEVEL: ♥♥♥_ _  The instructions are concise but only somewhat clear.  I did some research and discovered the company is based in India so I am assuming the lack of clarity is due to the fact that English is not the primary language. But the concept of the game is very simple and once you start playing, there is very little room  for confusion which means kids can play without supervision. And once you learn how to play, the directions become a moot point and you won’t need to reference them again. It really is a simple concept with little to no allowance for misunderstanding, though it would be nice if the grammar was correct, of course. At the end of this post, I do provide detailed instructions on how to play, complete with pictures.  ♥♥♥_ _ 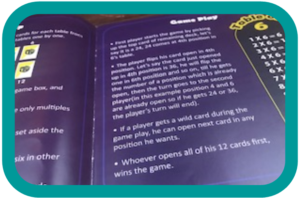 FUN FACTOR: ♥♥♥♥♥ It’s a fast-paced game, which is always fun unless one person is a pro at the necessary skill and the other is an amateur. The beauty of FLIP IT is that your  skill set is put to use for yourself but is NOT in competition with the other person. So, if you have a great turn, it’s because you had good luck while practicing your multiplication facts. If you had a bad turn, it was simply bad luck {and you still practiced your facts} but it had nothing to do with the other person having better skills. And the multiplication facts can be found directly on the card so even the newest beginner can be successful. So, it is truly fun for EVERYONE! ♥♥♥♥♥ 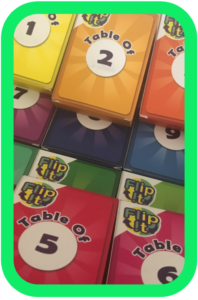 ORGANIZATIONAL COMPONENT: ♥♥♥♥♥ The box is very sturdy with handy tabs to secure the lid. The individual boxes inside are color-coded, clearly labeled and fit snugly inside the main box. We’ve played this game dozens of times and none of the cards are bent, nothing has required duct tape repairs and everything still fits perfectly inside the pretty purple square box. There is no wasted space for things to roll around and get lost. It’s as close to perfect as you can get with a game! ♥♥♥♥♥ 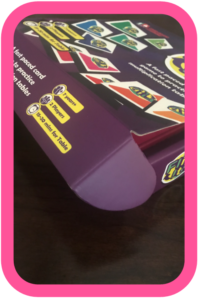 OVERALL SCORE: ♥♥♥♥♥ Math does NOT come naturally to my son AT ALL. As a result, we’ve struggled to find the right math curriculum for years and we’ve had to play a lot of catch up. In an attempt to help him not HATE math, we play a lot of games to make math fun while also trying to cement the imperative concepts along the way. We’ve tried out several different games and this one is, by far, the favorite of both of ours. I would recommend it for kids of all ages and skill levels. I would suggest it to families with multiple kids and families with only one at home. I believe it would make a great summer review game for public school kids but I also know it works perfectly for homeschool kids. Flip It is a great game for anyone and everyone! ♥♥♥♥♥

If you are ready to offer your kids a really fun was to cement those pesky multiplication facts, you can buy the game here on Amazon. 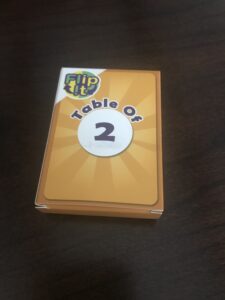 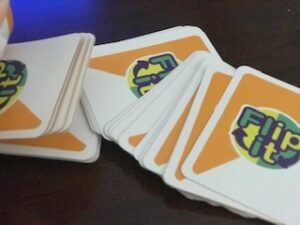 3. Deal twelve cards to each player.

4. Set the remaining cards aside. This will be the draw pile.

5. Without looking at their cards, each player needs to make two rows of cards {six in each row} in front of them. Cards need to remain facing down. 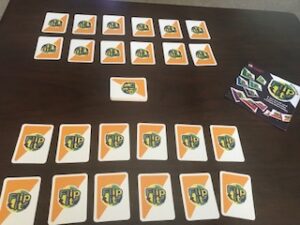 6. It helps to think about the cards as positions  1-12.   I labeled each position to help with these instructions. Now you are ready to play. 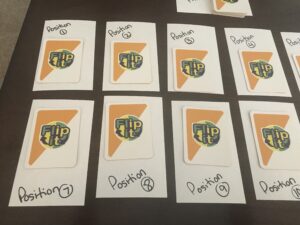 7. The first player flips over the top card from the draw pile. 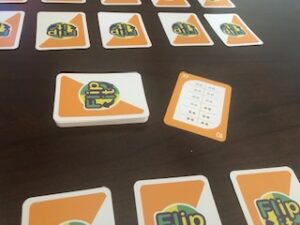 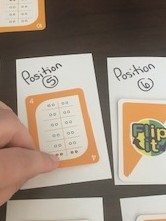 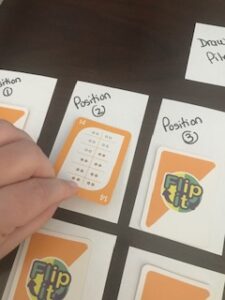 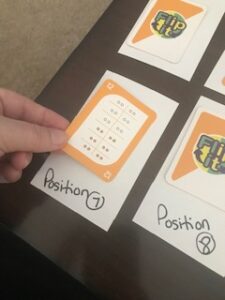 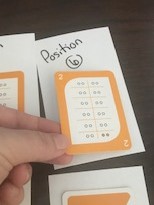 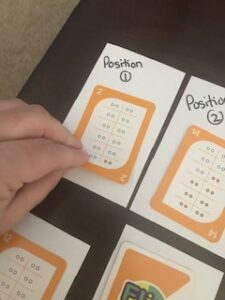 13. Uh oh! It’s a 2 which is the product of 2×1 and that position has already been flipped over. Player One’s turn is over for now.

14. So, now Player Two gets a turn. He flips over the top card from the draw pile. 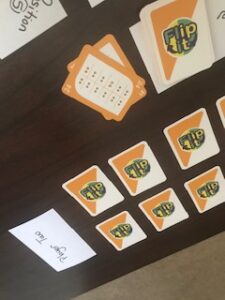 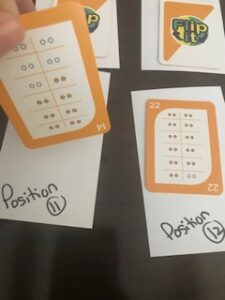 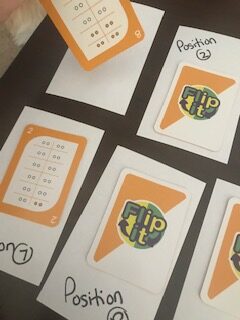 18. In the 7th position, the player flips over a 2. So, now he gets to flip over the card in the 1st position.

19. There he finds an 8 so he gets to flip over the card in the 4th position. 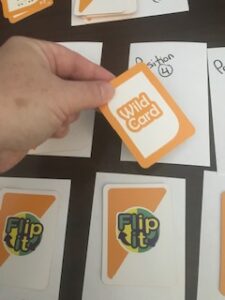 20. There he finds a WILD card which means he can choose a card in ANY position to flip over. 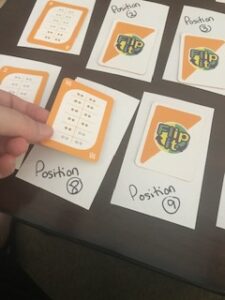 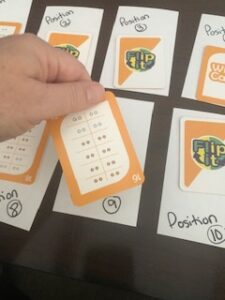 23. The players take turns flipping cards over until somebody flips all of their cards over. That person wins! 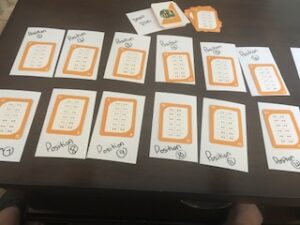